Mikey’s parents were at a Halloween party.  He pulled candy duty for the first time.  Having just turned thirteen, his father had deemed him too old for trick-or-treating, too young for parties, and just old enough to sit at home alone, handing out fun-sized Snickers to all the ghouls, ghosts, vampires, and Angry Birds in the neighborhood.

It was eleven thirty, and the doorbell hadn’t rung for over three hours.  The last batch of trick-or-treaters had been a half dozen zombies.  Undead “walkers” clearly inspired by The Walking Dead.  Shredded clothes.  Head wounds.  Well rehearsed limps and staggers.

Mikey’s heart stopped, the beat double-time to make up for it.  “Hey Liz.  Cool costume.”  A living dead princess in a pink, satin prom dress.

“Thanks.  Charlie did the blood and stuff.”  Liz looked over at Charlie, who’s slacked jaw tensed back up and revealed a smile full rotting zombie teeth.  Charlie Duffy, King of the Zombies, was big, strong, stupid, and scary.  He and Mikey had been friends until they got caught breaking windows at the old firehouse.  Charlie’s idea.

“Thanks man.  You shoulda come along.  We’re scaring the hell out of all the little kids and old folks.  Mrs. McGrath slammed the door on us.  Liz hissed at her, and I think she filled her Depends.  Petey heard her deadbolt the door.  I almost lost it.”  As if it were a command, the mini-horde burst into hysterics, losing all undead credibility.  Liz blushed and looked at her sneakers.

Mikey chuckled with the pack, and looked Charlie dead in the eye.  “Nah.  I’m good.  Gettin’ a little old for that stuff.  You know?”

Charlie’s grin turned scowl.  “Whatever man.  Maybe YOU are too old, MICHAEL, but  I’m never gonna be too old to scare grannies.”  Mikey thought this was probably very true.  The rest of the horde giggled, but also realized the sad truth of Charlie’s joke.

“No doubt, Charlie.  You guys want some Snickers?  If I eat anymore, I’ll barf my brains out.”  He held the too fancy glass serving bowl out to Liz.

“Thanks Michael.”  she smiled.

Each zombie reached a rotting paw into the bowl and took a snickers.  Charlie drove his fist into the bowl and grabbed a handful.  “Smell ya later Mikey.”  Giggles from the horde as they slogged down the front steps.

Charlie grabbed Liz by the shoulder.  “Come on Miss Lizzie.  The night is young, and so are we.  Let’s eat some little kids.”

Mikey watched the chuckling horde stagger down Maple Street.  “Happy Halloween,” he whispered, closing the door with his forehead.  He stood at there for a moment, head on door, wondering what made him too old for Halloween.  Too old to play living dead with Charlie.  And Liz.  No reason seemed to fit.

Mikey drifted back to the Halloween Scream-a-thon on the movie channel.  Within minutes he was asleep.  He dreamed uneasy.

Mikey shot bolt upright on the couch.  His heart was pounding and he had to catch his breath.  He knew he’d had a nightmare, but couldn’t remember it beyond a couple foggy images.  A sheer cliff.  A dingy tied to a dock on storming seas.  The rope worn to its last thread.  Someone (Liz?  Himself?) on board.  Silhouettes drifting in a mist.  And screams.  Lots of screams.  Mikey tried to put the pieces together into some fathomable narrative.  His heart stood still, and he decided this dream was better left alone.

Then he heard the thump at the door.

It was not a knock.  There was no pointed knuckle to this sound.  It was fleshy and hollow.  It was followed by a scrape.  Not keys.  Not nails.  More like fabric dragging against the door.

Mikey’s heart beat and then stopped.  He stood up without thinking, but didn’t step to the door.  He stood looking at it.  His guts were in knots.  His fists were clenched, and he had a film of sweat across his brow.  His mind raced with horrible unreal possibilities (fueled by sleeping through the Scream-a-thon no doubt), and he desperately wanted it to come to its senses.  Two deep breaths later, Mikey’s heart and mind seemed to relax.  His guts were slower to reason.

It’s probably Dad.  He had too much to drink again, dropped his keys, and stumbled against the door picking them up.

Mikey tried to believe it, but a few seconds wait gave him second thought.  Dad would have found the keys by now.  If not, he’d be swearing, and Mom would be trying to calm him down.  But Mike heard nothing.  Nothing.

Mikey whimpered, startling himself.  He was frozen in fear.  He couldn’t move.  He stood.  Not breathing.  He listened.

Another small groan.  The wind maybe?  Certainly not Mom and Dad.

Mikey became embarrassed at the incredible chicken he clearly was.  “It’s nothing,” he told himself.  He forced his right foot to step, then his left.  Each successive step fell easier, and by the time he reached the window to the left of the door, he was walking almost like a human being.

“It’s nothing,” he whispered again.  Then why are you at the window and not the door?  It may be nothing, but you aren’t fool enough to open that door without taking a peek first.

Mikey startled at first glance.  A figure at the door.  Too close.  All silhouette from the street lights.  Certainly not his dad.  Way too small.  Bigger than him, no late night trick-or-treater, but way too small to be Dad.  Way too close to the door.

Mikey’s eyes adjusted to the darkness and his relief was instant.  It was Charlie Duffy, King of the Zombies.  It was late, and Charlie shouldn’t be out there, but he was.  Mikey knew that Charlie’s mom probably wouldn’t notice anyway.  If the cat’s away, the mice will play.  And if the cat just doesn’t care, well the mice may as well stalk the neighborhood all night, dressed as zombies.

Mikey stepped to the door.  “What’s up Charlie?”

“What is he doing?” Mikey wondered.  “Why is he here this late?”

I embarrassed him.  That’s why.  I told him I was too old for trick-or-treating.  Might as well have told him I was too cool.  Too rich.  Too “I don’t give a care.”  And I was too everything right in front of Liz.  That was the point.  Liz.  He was with her, and I wasn’t, so I had to knock him down a peg.  Now Charlie is here for payback.

Mikey wondered what to do.  He didn’t think Charlie would hurt him.  They’d been friends their whole lives until the firehouse windows.  Then Mikey remembered, “…but  I’m never gonna be too old to scare grannies.”

So I’m an old lady, and you’re here to scare me.  Take me down a peg.  Probably have a laugh about it tomorrow as you tell Liz how I cried and wet my pants.  Well, mission accomplished old buddy.  You scared me half to death.  But you’ll never know it.

Play it cool Mikey.  Don’t give this crazy jerk the satisfaction.  Knock him down again.  He’s asking for it.

Mikey yanked the door open, “Real scary jerk.  Why don’t you go back to your trailer and…” 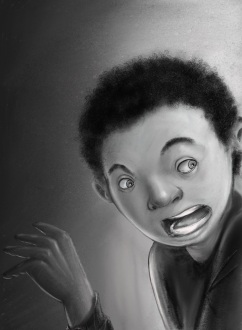 Charlie stood in front of him, all slouch and fog.  He’d changed his costume.  His old zombie wounds were peeling off his palid face, and he’d covered his mouth and chin in a fresh coat of fake blood.  He’d applied a new, gruesome wound to his neck, twice as big as the small ones from his face.  It was fresh, the blood still wet.  And pumping?  There was a shred of pink satin clenched in his right fist.

Mikey froze.  His heart stopped, then beat double-time to make up for it.  He felt warmth run down his leg.  Laugh it up Charlie.

Charlie didn’t laugh.  His eyes fixed on Mikey, and an animal grunt swelled from his guts.  “ikeeey.”

Mikey had knocked Charlie down in front of Liz.

Charlie had come back.

Made of Lines – The Art of Kevin M Barry

Made of Lines – The Art of Kevin M Barry